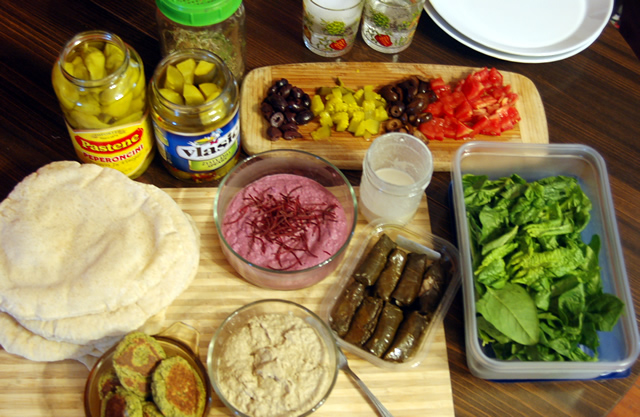 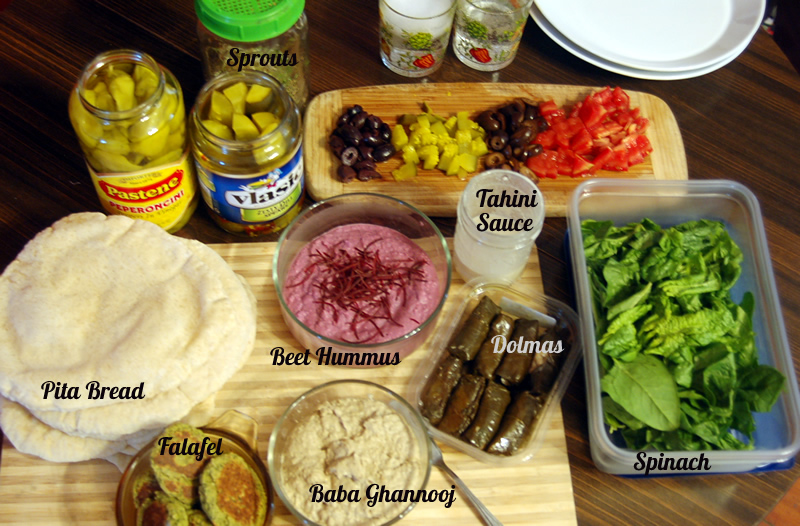 let proof, then mix with

knead until smooth; let rise to double, divide into eight pieces, roll flat into a circle and bake on a heated stone or cast iron at 475F

put everything in a food processor except the garnish; blend to consistency; garnish.

Justin used the Minimalist Baker recipe, except he added more garlic (of course!)

I used this recipe from Cooking With Plants, except I didn’t have enough tahini to make that much, so I scaled it down and then just tasted it along the way.

This isn’t going to really be a recipe because I’m such an a-hole that I forgot to mark what I did, and it doesn’t matter anyway because falafel is an experience, not a recipe.  So basically, you’re making a chunky hummus and then baking it.  I used:

Keeping to the low-fat ideal, I did not fry the falafel. We can all agree that fried falafel really is better than baked falafel, but I will say that this was very good.  I did brush each falafel on one side with oil, and baked them on the hot pan on which I had just finished the pita, so they did have a little crispness to the outside, which is all I really wanted.

Justin picked up the dolmas at the store. I didn’t care for them much, but he really loves them. They seemed a bit oily and soft to me. I think I’d like it better if the rice was a little more “rice-like” and not quite as softened. I’d also like it better if the grape leaves were just a tiny bit firmer, and if they weren’t quite as oily.  Maybe “fresher” is the idea.  The grapevine at the garden is just starting to leaf out, so maybe this year I can get some leaves to prepare to make our own.

Blah blah blah, anyway: I think my most favorite thing right now is the Baba Ghannooj. It’s creamy and rich, but not heavy. It works really well as a “mayonnaise” for a pita sandwich, but truth be told: I’ll just eat it with a spoon. We bought some on a whim last week and haven’t been able to get enough of it since. 🙂  If you’re not into making it on your own and you’re in the neighborhood, definitely pick some up from East Side Pockets.